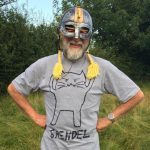 My interest in astronomy probably began with the comet which heralded my birth in 1952….(untrue, so far as I know). Although I do share my birth date with Charles Messier! Certainly I recall looking up at the skies from the age of 7, and I was watching for “planets” (which actually turned out to be artificial satellites moving across the sky) by the age of eight or nine. That would have been c.1960-61, when there weren’t that many satellites around. I did have the very dark skies of Cleethorpes in Lincolnshire, skies which have sadly become grievously degraded now by light pollution. We had no money for optical equipment, but I used to pester my parents to let me look at the Moon through the “penny-in-the-slot” terrestrial viewing telescopes (“20 diameters magnification”, whatever that meant) on Cleethorpes seafront. A penny got you a whole minute’s viewing - unless the mechanism was stuck and you had as much blissful scrying time as you wanted!Eventually I was able to afford a small 40mm terrestrial telescope - mail order from the Exchange and Mart. That was the first of many. Up to date (and including a small pull-out refractor of the “Arr! Jim Lad!” variety) I have now owned 26 telescopes, and had the use of many more. The largest was a 16-inch fork-mounted Newtonian which I rebuilt after its previous owner’s depredations. This one is now doing decent service in the dark skies of Galloway. I still have half a dozen scopes scattered about the place (or is it more…?).Over the years I have belonged to a number of astro societies: York City Society, York University Society, Cleethorpes and District, Leeds University, Leeds Astronomical Society, West Yorkshire Astronomical Society, Huddersfield A.S., the JAS and the BAA. Having returned to live in Lincolnshire, I am now back in the fold of the Cleethorpes crew. I did my stint as President of both the Leeds Uni and the Leeds Astronomical Society.My observing interests have always been fairly catholic, but I have had a general tendency towards  Lunar and Deep Sky (“fuzzy blob”) observing. I have tried my hand at imaging over the years, first in the Film Age and now in the Digital Age. I claim no great facility - computers and tech are always a bit of a struggle for me. Thus far I have avoided paying more than a few coppers for software - I use the legit free stuff (as you would expect for someone who was born in Barnsley).I have had my battles with authorities and individuals over the issue of light pollution, and the experience has not made me optimistic on this score. However, I continue to do my astronomy as best I can for the same reasons that I always have - for the sheer wonder and love of the pursuit.