We are now just a short time before opposition. First I want to draw your attention to the occultation of Mars by the Moon on the morning of the day of opposition, December 8. Predicted timings can be found in the BAA Forum post made on November 1 by Alex Pratt, so I won’t give them here. Likewise if you can access Sky & Telescope for October you can look up the article by T.Dobbins and W.Sheehan that predicts the possibility of witnessing some short-term flashes (specular reflections) from the martian surface at the position of the Edom (Schiaparelli) crater: these might be visible from the USA during Dec 3-7 when the latitudes of the sub-Earth and sub-solar points are very close. Short-term series of flashes were seen in 2001 in the north part of the crater, and it is not clear whether the correct combination of circumstances can occur this time when the prediction is for the southern part.

The number of observers has grown steadily and we are now up to over 70 contributors. I have not had time to revise the list posted in an earlier update.

It is now time to watch for and try to time the transition to ground cap, when the polar region will at least become bright in red light. At present there is a complex structure to the hood, and many gaps in it, particularly near the south edge of the hood. See the collage for Oct 31 by N.Phillips, posted here. On Nov 12-13 one of these in the longitude of Mare Acidalium was well seen visually by P.Abel and the Director. There are also numerous bright spots and we give here an image and a polar projection by M.Kardasis from Nov 2. This bright spot was near the crater Perepelkin but the coincidence in position was not perfect. In general the bright spots have been rather changeable.

We have also seen some evidence of returning meteorology after the regional dust storm. Evening clouds have been reported since late last month for example over Arsia Mons (seen by J.Sussenbach on Oct 30, G.Walker on Nov 7 (posted here), etc.). The latter volcano shows two seasonal white cloud maxima. But these clouds are not particularly strong.

The Martian winds have cleared some of the dust deposits on the floor of Hellas. For example on Oct 25 Morales secured an image showing fugitive albedo details in the centre of the basin. The settled dust in Argyre was disturbed by Martian winds causing a small yellowish finger of suspended dust to project north or northwest from the basin. This event was reported by J.Sussenbach (see his image collage for Nov 11-13) and shown in the work of several other European or UK observers including G.Lewis (see his infrared image for Nov 13, suitably annotated and posted here). The Director saw it visually on Nov 12, when it made the N. edge of Argyre appear irregular. It was still apparent on an image received from P.Tickner for Nov 15, as I finish these lines.

Finally, before the phase defect disappears, do watch the evening terminator for any projections due to high cloud, as indicated upon the image by S.Watanabe for Nov 11.

Good luck with the December weather! 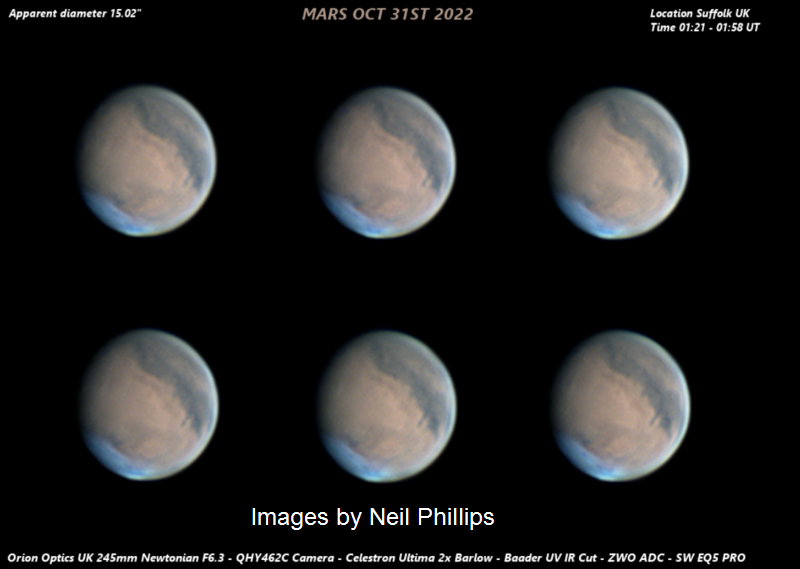 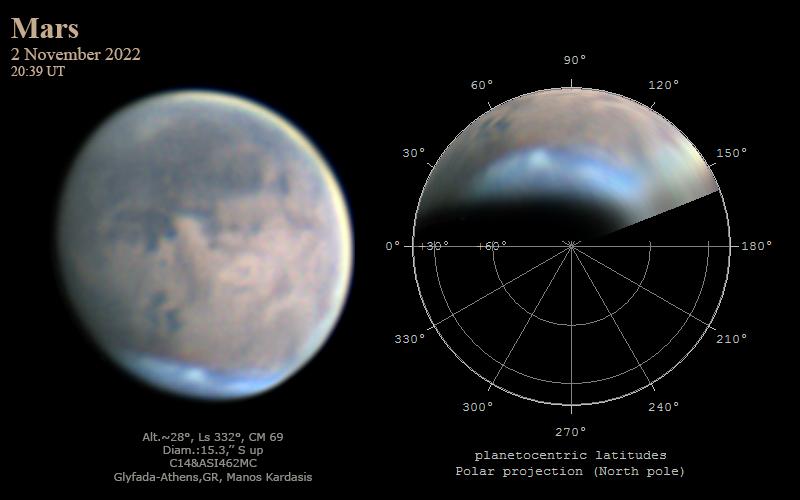 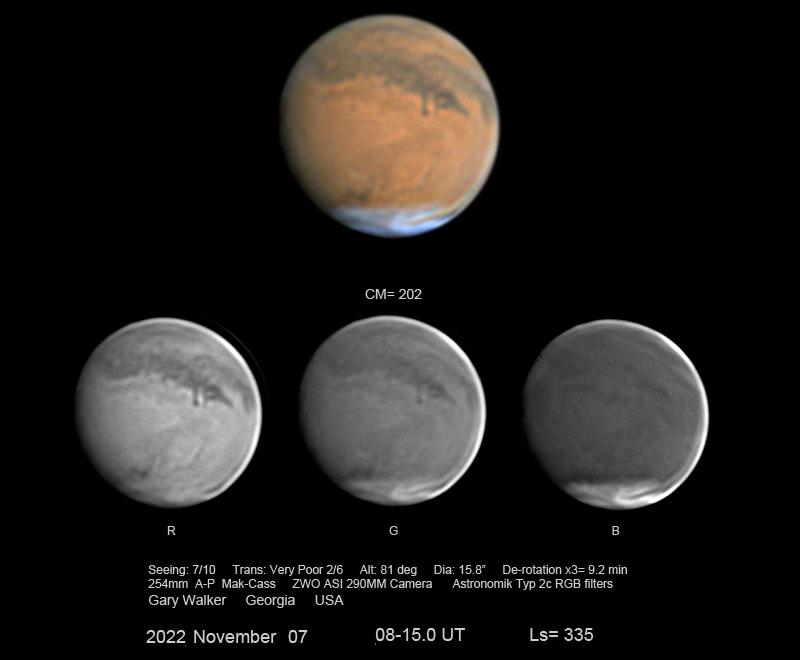 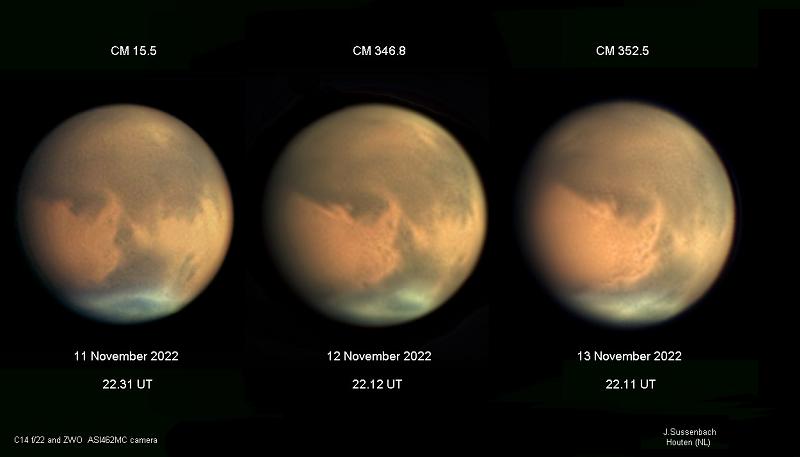 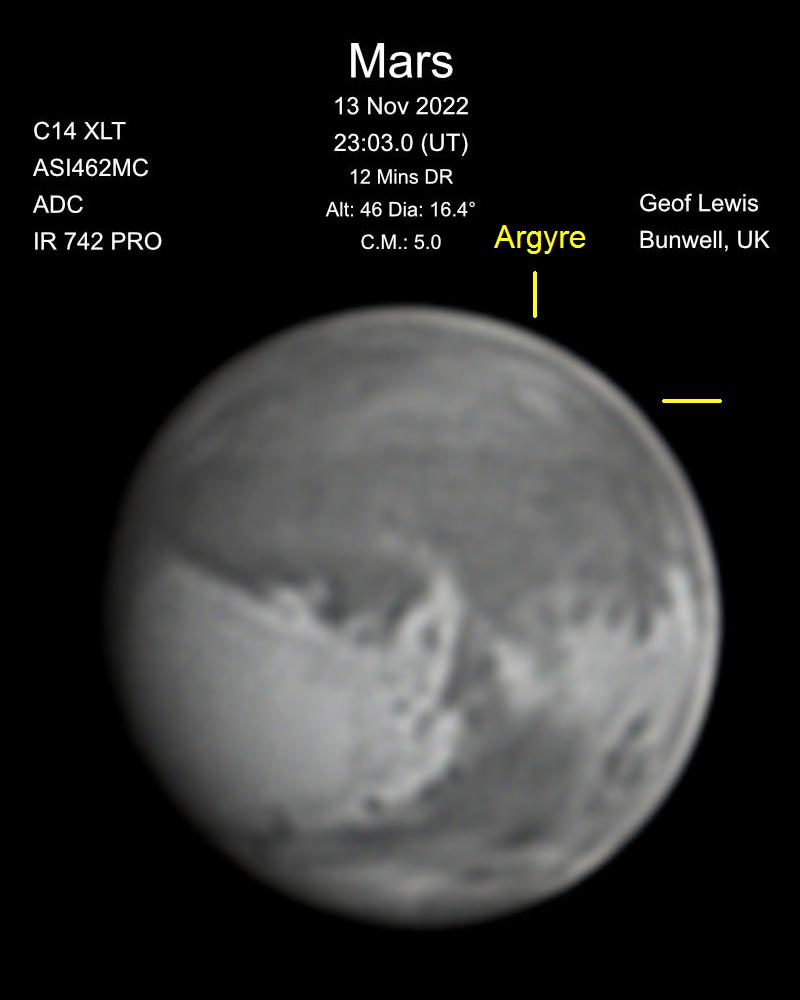