This comet (aka 29P/Schwassmann-Wachmann 1 or 29P/SW1) was discovered in 1927 whilst exhibiting a strong outburst in brightness. These outbursts are the result of sudden eruptions at the surface of the nucleus, which probably measures about 60 km across. They happen several times each year yet we still do not understand what mechanism underlies its behaviour despite the fact it is readily observable every year for about 80% of the time. It would make a fascinating target for a space mission but although these have been proposed, none are currently planned. So instead of a space mission, the BAA Comet Section has launched this special project to ensure that our understanding of it is greatly improved and that our new findings will help to attract the attention of the astronomical community making it a worthy destination for a future space probe. 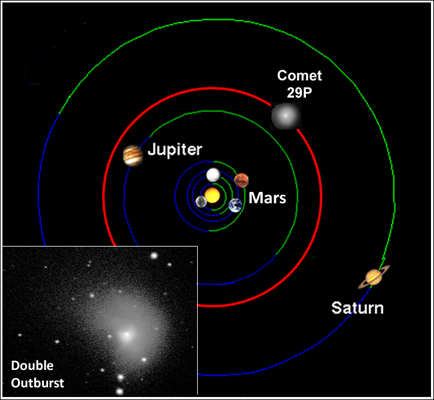 This mysterious object is temporarily locked in its present near-circular orbit by the gravity of the giant planets, Jupiter and Saturn. Located at a mean heliocentric distance of 6.0 au, 29P describes an orbit around the Sun every 14.7 years or so, with a perihelion distance of 5.7 au and aphelion of 6.3 au. Because it never approaches the Sun closely, it never exhibits a distinctive tail, i.e. quite unlike most people’s idea of a comet. But like Jupiter and Saturn, the comet is observable during most of each year apart from the couple of months it spends in solar conjunction. Its current location is shown in the JPL Small-Body Database Browser.

A YouTube video of a BAA Webinar on the subject of this most unusual solar system object has been available since 2021 May 14. It features Prof Laura Woodney of California State University, San Bernardino and myself presenting some latest findings about this object and talking about possibilities of sending a space probe to investigate further.

Intensive observations have been underway since 2014 when the mini-outburst phenomenon was discovered, i.e. weak outbursts not exceeeding 1.0 mag in amplitude. The following set of plots show its behaviour during its seven 2014-2020 apparitions (click on the image to obtain larger views). 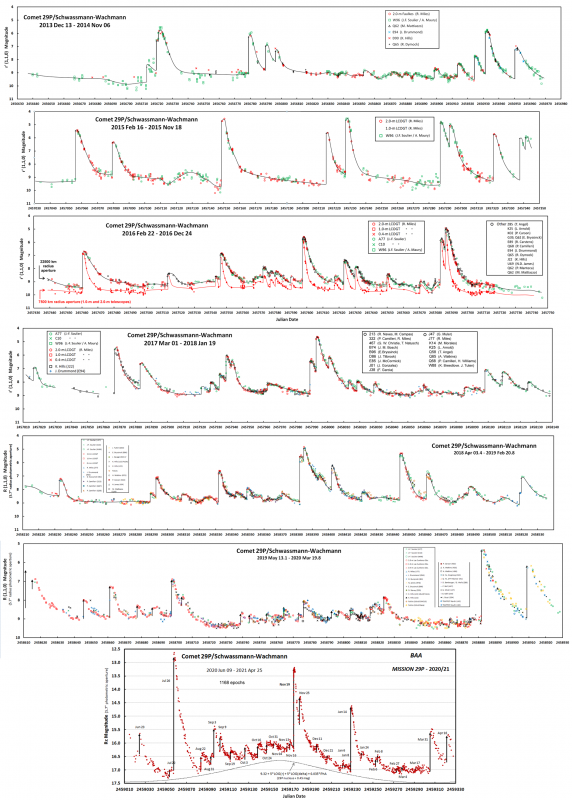 So what can you do as an observer?

First if you want to capture images that can be used to perform photometry then do consult the Observing Tutorial.

Currently Richard Miles coordinates the observing campaign so please direct any queries to him. The main objectives are:

1. Detect any new outburst as soon as possible after it has taken place so that we can (a) determine the time of the event, and (b) initiate ‘target of opportunity’ images with the 2.0-m Faulkes Telescopes to study the resulting expanding coma.

2. Try to capture 29P in the process of outbursting, i.e. observations start just before an eruption happens then measuring the brightness increase of the inner coma, determine maximum brightness, and then follow its subsequent decline photometrically. The rise and fall tells us about the underlying processes going on on this strange body.

3. Establish a long-term archive of: (a) its photometric lightcurve (intensive observations began in 2014); (b) a high-precision astrometry archive (so its orbit is precisely known for the prediction of stellar occultations); and (c) archive images depicting the development of the expanding coma after each significant outburst. Access to the 2.0-m Faulkes Telescopes in Hawaii and Australia is transforming our understanding. It has been possible to study the properties of the nucleus alone by extrapolating the coma profile to zero photometric aperture size using the 2.0-m images. Help from members with analysing these 2.0-m images would be very welcome.

4. Observers equipped to observe and accurately time stellar occultations may be interested in recent developments which are permitting us to measure the size and shape of the ~60-km nucleus.

We plan to build an extensive website record of past observations, new findings, and detailing our understanding of this object.

Here is a summary of the layout envisaged

Below is a video made from a series of some 57 images taken with 1.0-m telescopes of the Las Cumbres Observatory network over a two-month period showing an outburst that began on 2018 August 01 and which brightened from magnitude 16.5R to reach magnitude 14.2R within just a few hours. The field of view is about 2 arcminutes square. If necessary, to see the animated video clip, right click on the image and select ‘Open image in new tab’ then open the new tab.